Join Date: Mar 2018
Posts: 190
Garage
Hatchi's BRZ journey
Figured I would log a build thread of all the mods carried out to date and also for future improvements


Purchased used in early 2018 from a main dealer I found out the first owner was Subaru's own UK press officer.....which was nice! At only 14 months old and in pristine condition it was an easy decission to make. It was also very evident that it hadn't been driven hard as there wasnt a single chip to the front end (something that has now been addressed

The day I picked her up 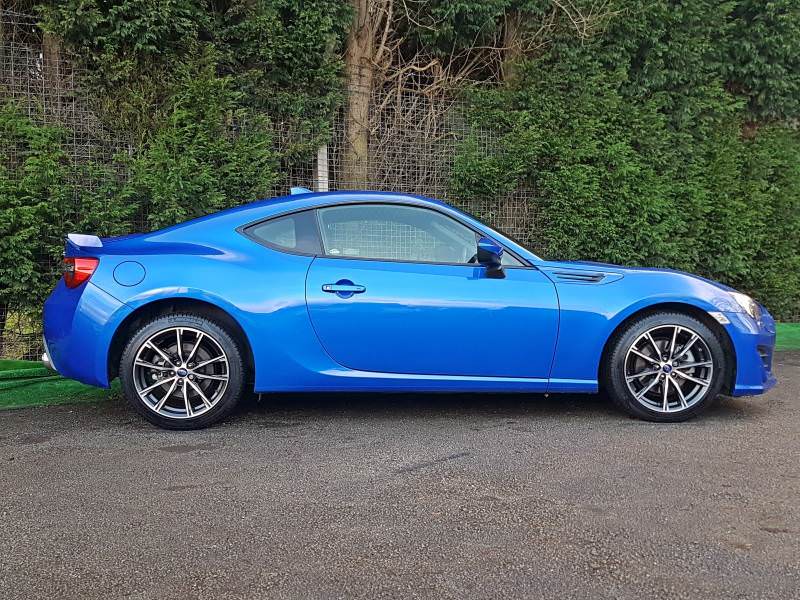 Having not driven a RWD for well over 15 years it took a bit of getting used to, especially the way the rear tyres broke traction under the slightest throttle inputs. Fun at low speeds yep, but otherwise far from ideal! I left alone for 6 months to climatise and enjoy her in stock form and this also gave me time to decide whether it was worth throwng money at her. Once I realised that it would be my plan would be to do things slowly so I could appricate the changes (or not) Being so close to the fabulous Track Mon circuit (Anglesey) the very first upgrade planned was to change the pads and fluid so I could see how she handled on the track.

Having heard such great things about the DBA/Hawk combo from other drivers of my previous car I ended up changing out the discs, pads, hoses and fluids. I went for DBA 4000 series T3 slotted and Hawk HPS pads all round. I had two close members circuit events close together so I got a nice comparison and I can honestly say that out on the road there is very little difference in pedal feel with maybe a tad more bite but when stamped on for 15/20mins they are a huge improvement

Any more heat in them and performance rapidly drops off so they obviously have there limits. These two events also convinced me that the primacies were next up for replacing 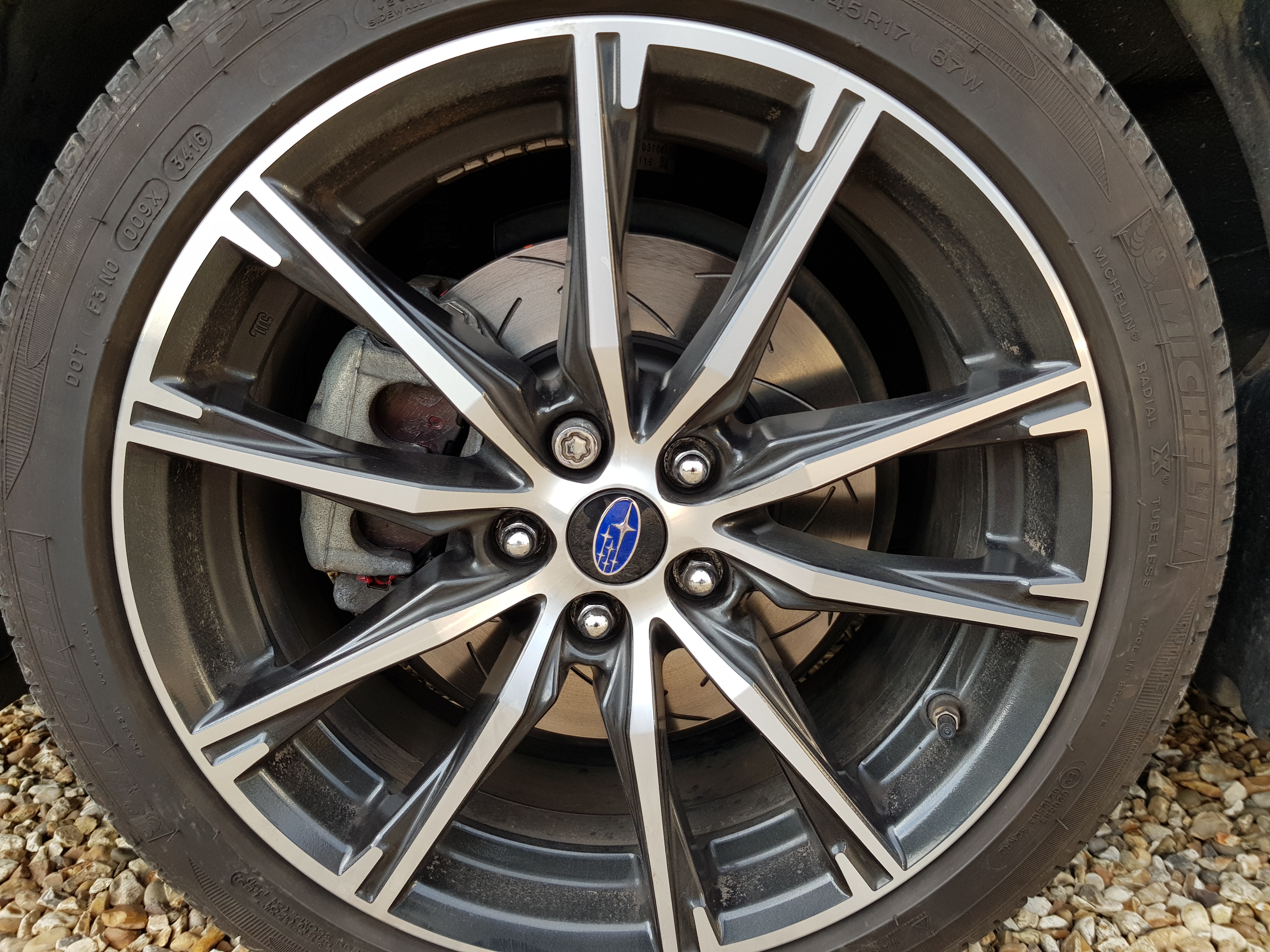 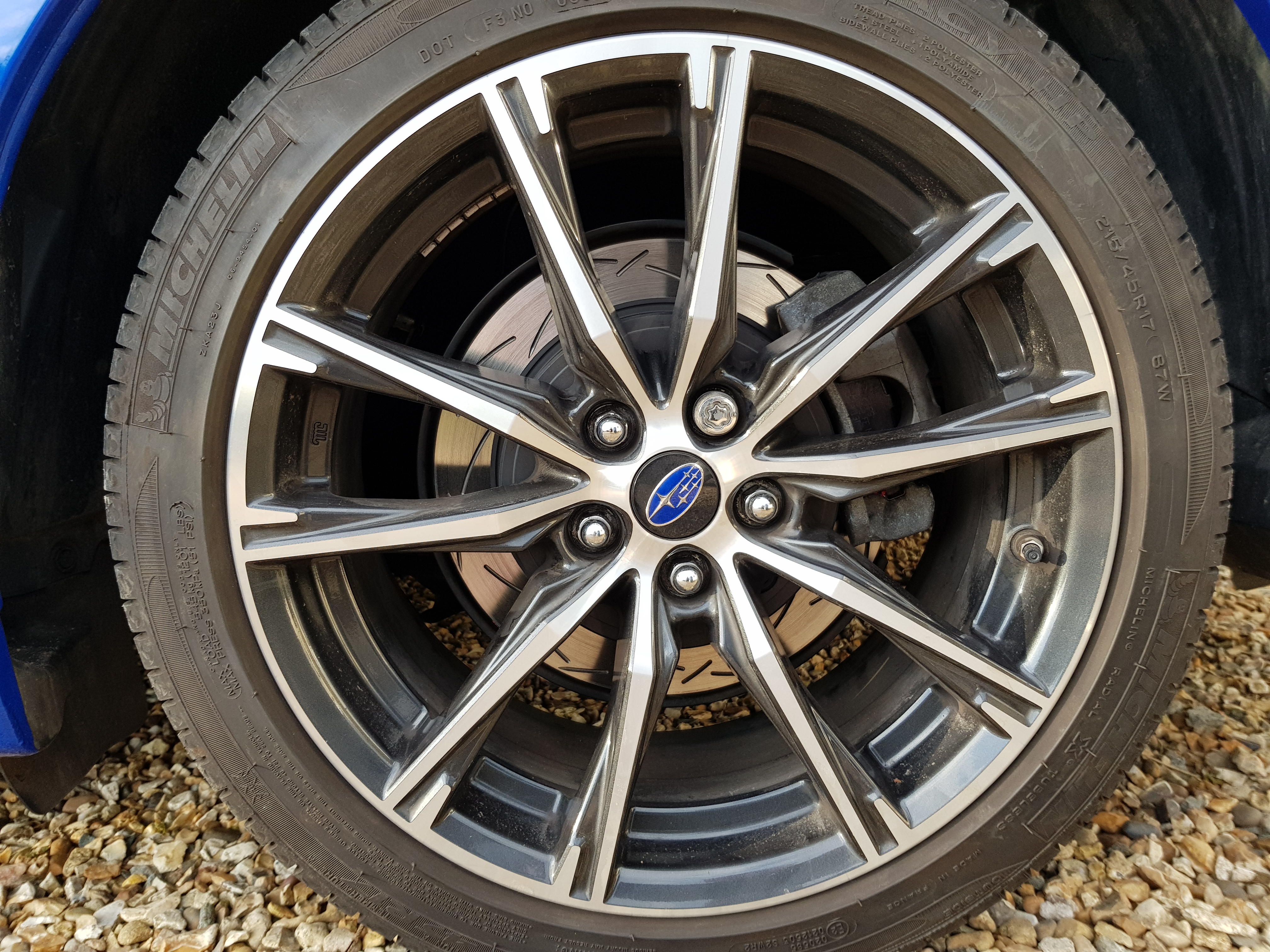 
Join Date: Mar 2018
Posts: 190
Garage
Rather than replacing the stock tyres which by now I am pretty convinced will still have tread on them well after I'm gone I opted for an enterely new set of wheels and tyres. I figured a little more width wasn't going to hurt for road use so ordered up a set of bronze XXR527's in 18x8.75 and pop some 225x40x18 PS4's on. I booked them in for fitment and it took all of 5mins for them to call me over and check them on the balancer. All four wheels had horrific amounts of run out on the extended bead that ran round the inner edge. It made them look buckled. I even later drove to the supplier who offered to let me check the whole batch they had in stock. Every one had the same issue. Quality control courtesy of Stevie Wonder

The XXR's were returned and replaced with a set of 17x9 Rota Titan's ET42 in Matt Black. My initial plan was to get some lowering springs at the same time to avoid the tractor look and I would factor in some camber bolts to dial in better settings as I went on. I changed my mind after reading that changing out the dampers was a safer bet when adding lowering springs and looking at the cost of a good set of coilovers there wasnt much price differential so I would do some coilover research


Wheel and tyre fitment day came and although the supplier was confident the tyres I had ordered were a good fitment it was soon apperent that there was inner clearance issues at the front with the strut. I had ordered 235x40x17 PS4's all round but was now confronted with either a new set of wheels or looking at different tyre sizes. In the end I went for 245x40 at the rear and 225x45 up front. The rears are beautifully flush but with stock zero camber the fronts stick out of the body. In hindsight an 8J on the front would have been a better option for a staggered set up. 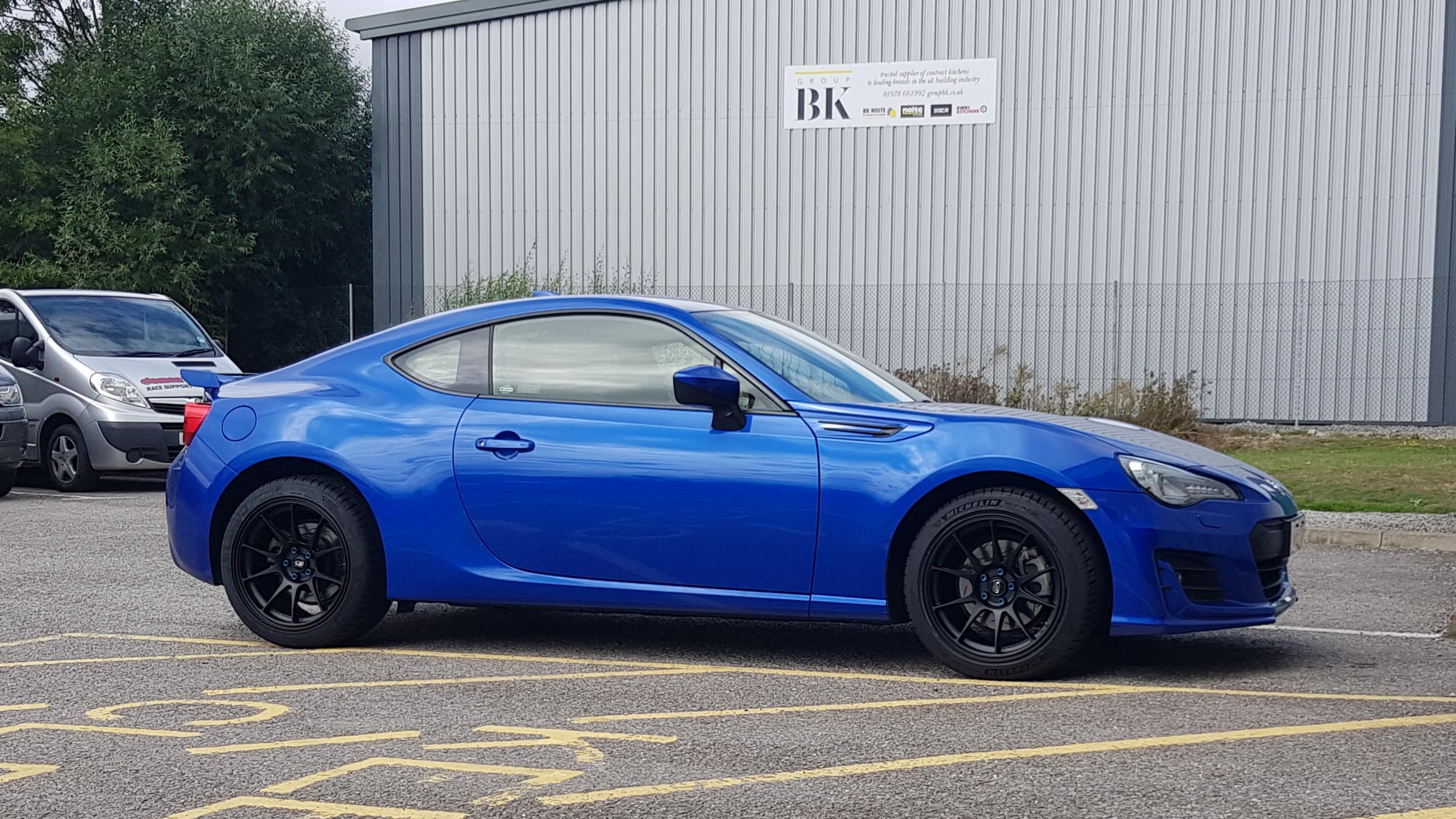 Upon arrival there is much puzzlement and ambiguity about what I ended up with, what I should have got and what Ohlins have decided to currently recommend. Full details in another post but in summary these R & T kits have undergone spring rate changes a plenty and are currently showing 'Not in stock' on Ohlins own website! My purchase options with many UK suppliers earlier this year were to have 40N/mm front and 30N/mm rear springs. By the time my order arrived Ohlins own website were recommending 40N/mm front AND rear and I undersrand have since gone on to recommending 50N/mm front and rear

Their own preload instruction with mine were also different to what I actual recived! You have been warned

Fitment day with Rich at Tuned UK comes along and we discover that Ohlins have designed their strut so that camber bolts do not fit safely in either of the two mounting holes. After further investigation no camber bolts are an option on these struts! And I so nearly went Tein's

Anyways fitment went smoothly and although Ohlins now sell their own adjutsble top mounts sepertaely for big £££ I was planning on camber bolts and went with utilising the stock top mount option. I am really pleased with the R & T kit. Its a great improvemnt over the stock suspension and although the recommended drop is only 20mm all round, having seperate preload does allow for a little more if desired.

I'm going off memory now but settings acheived were:

They have been on for over 4 months now and I am currently sitting on 14 clicks from hard all round for daily driving. Only had one track day on them and it was a hot one. I experimented a lot and settled on a softer rear no matter how hard I went as I found an equal front and rear set up harder to rotate 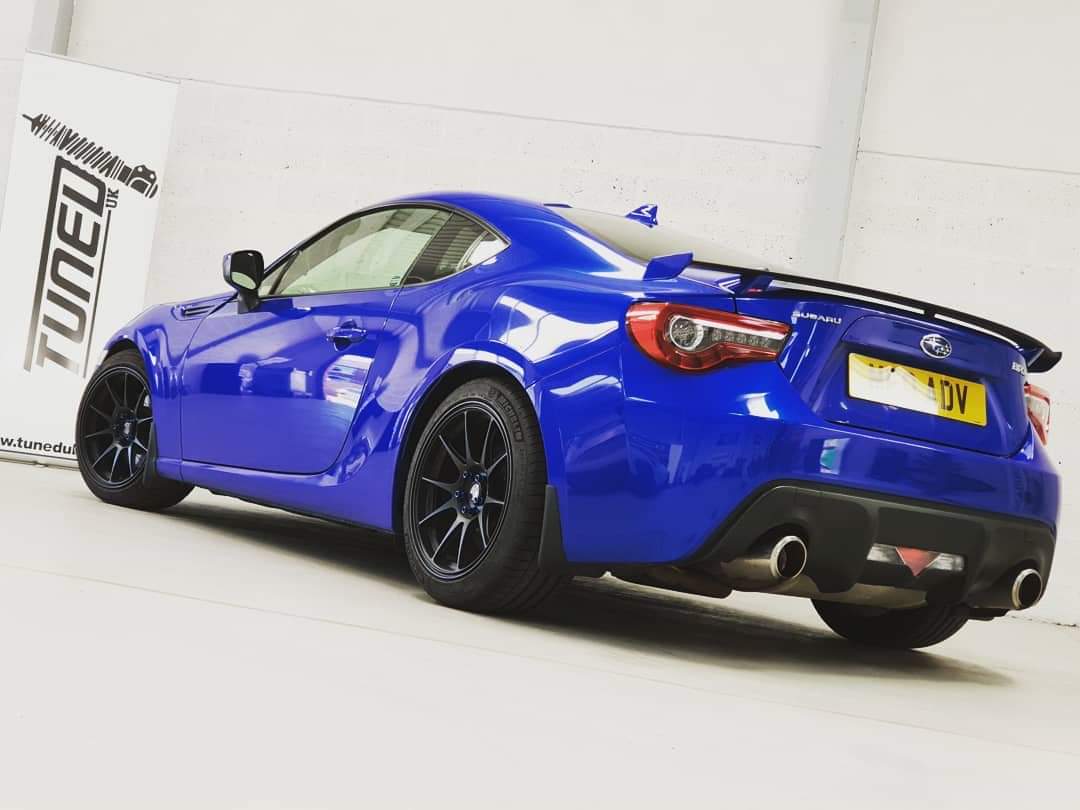 
Join Date: Mar 2018
Posts: 190
Garage
To address the lack of camber issue my hunt in July went on for some adjustable top mounts. Discounting Ohlins own exhorbitantly expensive offerings I dscovered very few manufactures offered compatible mounts for the Ohlins R & T (notice the recuring theme here?) I have posted another thread ref my findings and listed compatible kits

I finaly opted for Raceseng's GT86 CasCam mount https://www.raceseng.com/products/cascam They have options for using stock mounts with their own spring perch and also with a selection of coilovers. https://www.raceseng.com/media/pdf/c...ck-fitment.pdf. The product I purchased utilises the Ohlins spring perch and only needs the correct shock nut and shock bushing listed above. 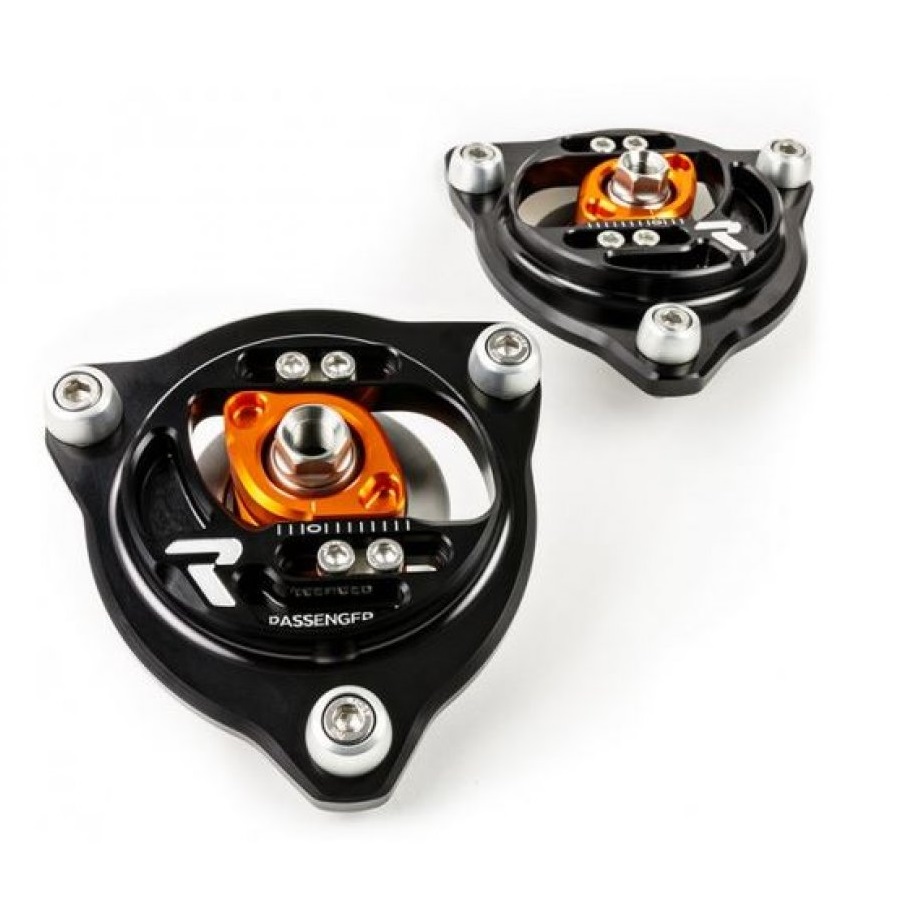 
Join Date: Mar 2018
Posts: 190
Garage
Yesterday the car was booked in with Rich at Tuned UK for some fluid changes and to get the top mounts fitted and the geo set up


First up was the discovery of this

This is its first diff oil change and alarmingly there looks to be a huge amount of swarf on the magnetic drain plug. Is this normal or should I be worried? Changed out for Millers CRX LS 75w90 NT+ (7968) 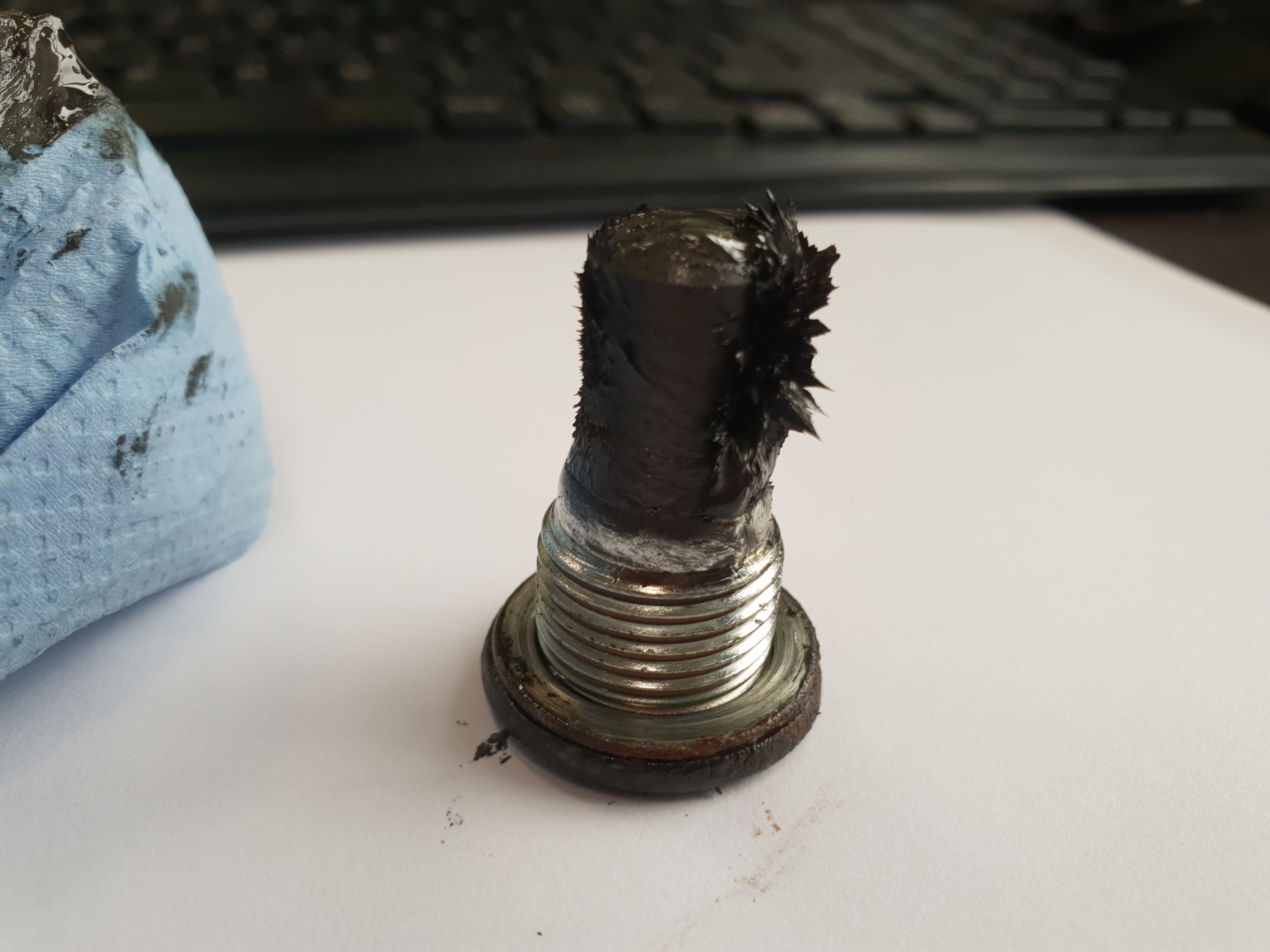 Caliper and pad inspection and the DBA's and Hawk pads are holding up well. The pads have another couple of track days in them so the PFC pads wont be required just yet. I popped on some Brembo temp strips which will come in handy for the next circuit event. New Motul RBF660 Dot 4 racing fluid added

Oil change to Millers XF Longlife 0w20 (7950) next and the discovery that the oil filter ordered from Subaru is of a different type to the one Subaru last fitted on its 20k service https://www.gt86ownersclub.co.uk/for...ter-query.html

Finaly the Raceseng top mounts. The mounting instructions are not great so we ummed and arred for a good while about what Ohlins parts to utilise and which to leave off. This is probably the best thread to give you an idea of whats involved and what surprises you are in for Ohlins Road & Track for FRS/BRZ suspension install/review thread - Page 9 - Scion FR-S Forum | Subaru BRZ Forum | Toyota 86 GT 86 Forum | AS1 Forum - FT86CLUB As well as having to adjust the height and preload to compensate for the 15mm drop the mounts gave our initial concern was the amount of thread (or lack of it) left for the shock nut. In the end Rich was satisfied that once torqued down it was plenty enough

We set front camber to neg 2.5 degrees and added a touch more castor for good measure. The SPC LCA's went on without incident. How these stand the test of time will remain to be seen but for now they have got the acheived nice and even neg 2.0 degrees of rear camber I wanted

I was looking for a minimum toe out on the front and a slight toe in at the rear but as we spent so long faffing with the top mounts I have yet to pick up the print outs to confirm the actual readings. Ride height remains unchanged at the rear but the front has changed a little. Pretty sure its 350 rear and 345 front but again I need to confirm. Due to time restraints the two 245x40x17 PS4's will also have to wait to be mounted. This will have me on a sqaure road set up on the Rota wheels

Initial impressions of the addition of camber:

Feckin awesome steering response. What percentage is down to the lack of rubbery material and how much is due to the negative front camber is difficult to know but the overall result is night and day. I love it

I was expecting a little more tramlining than I actual experienced and TBH it's only rearly rough surfaces that heighlight the lack of bushing. My home island's tarmac is generally extremely good and the very few speed bumps in built up areas can always be avoided. Really looking forward to the next track day on 29 Aug
Last edited by Hatchi; 1st August 2019 at 18:08.
Hatchi is offline
Quote
post #6 of 29 (permalink) Old 1st August 2019, 14:52 Thread Starter
Hatchi
Senior Member

Join Date: Apr 2012
Posts: 4,864
Garage
Nice thread. Adding negative camber is unlikely to make the steering more responsive; it had the opposite affect to me, but solid top mounts and a bit of toe out will improve the sharpness and feel. Generally the solid top mount will make it feel sharper, due to less slop, while a bit of toe out will add some nice feel to it.
Hatchi likes this.
Ade's Road and Track Car Thread
Cosworth - AP Racing - Ohlins - Hayward & Scott
Ade is offline
Quote
post #9 of 29 (permalink) Old 1st August 2019, 18:10 Thread Starter
Hatchi
Senior Member


Join Date: Mar 2018
Posts: 190
Garage
Quote:
Originally Posted by Ade View Post
Nice thread. Adding negative camber is unlikely to make the steering more responsive; it had the opposite affect to me, but solid top mounts and a bit of toe out will improve the sharpness and feel. Generally the solid top mount will make it feel sharper, due to less slop, while a bit of toe out will add some nice feel to it.
Cheers for the info Ade. So the extra front camber will reap benifits on track under cornering?
Hatchi is offline
Quote
post #10 of 29 (permalink) Old 1st August 2019, 19:46
EB2429
Groupie

I was reading that the versus engineering stuff is very good quality but doesn't offer a significant £ vs performance, not sure if that's true? A diffuser would be nice though...
EB2429 is offline
Quote